Mercari and its business partners have also announced the start of an official Twitter follow and retweet promotional campaign. Starting December 16, people who follow or retweet the promotional Twitter account (@PacificleagueEM) will be eligible to enter a draw for a baseball signed by a player on one of the six Pacific League ball clubs. Current plans for “Series 1 – ’21 Season Best Players,” which will form the starting product lineup, will focus on the game footage of 18 different plays delivered by players who excelled during the 2021 season. Each NFT will have a rarity score indicated by stars and rated according to the scene and player. The products will be available on a dedicated website for baseball fans to purchase easily and enjoy. Normally, spectators are prohibited from downloading official game footage, but Exciting Moments users will be able to download and own any content they purchase. They will even be able to share it on social media provided they do so using a feature offered by the service.

Note: Initially, the service will only offer a feature for purchasing products, but the company is also looking at providing a feature that uses blockchain technology and another feature for reselling collection items. Concept video of the service 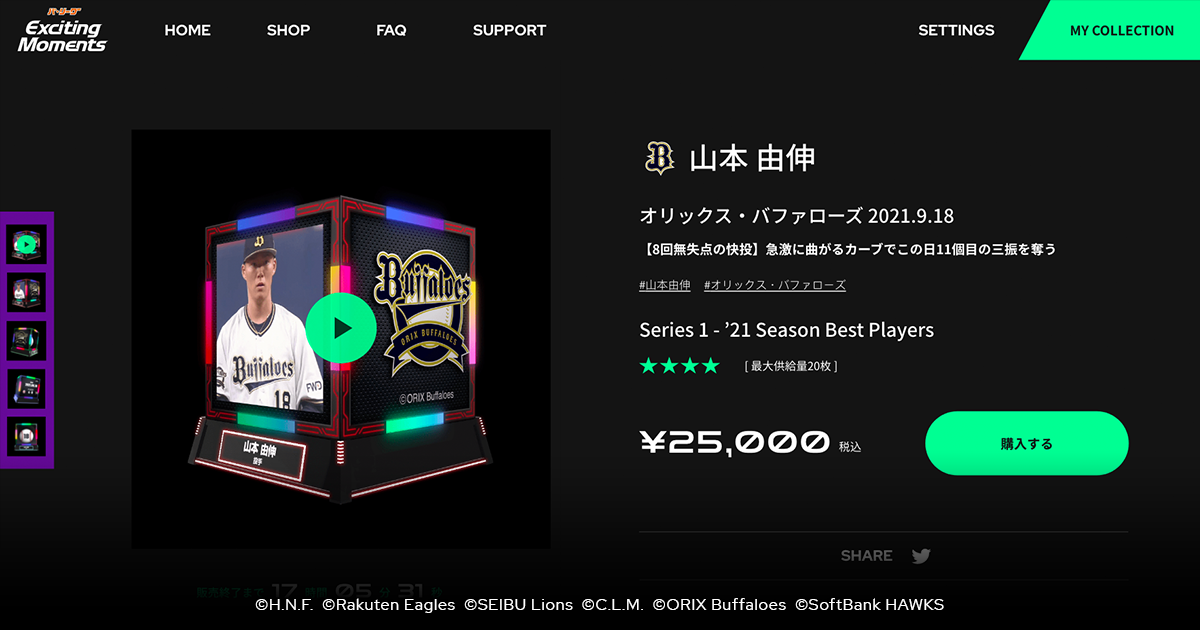 Note: No one-star products are available for the first round of sales.

■ Background of “Pacific League Exciting Moments”
Due to the COVID-19 pandemic, professional baseball teams have recently continued to play games either without spectators or with capacity limits imposed. Under these conditions, each team has seen a substantial drop in sales opportunities of what have always been their main sources of revenue, such as tickets, food and drinks, and official team merchandise. For some teams, this translates into sales this year being nearly half of what they were compared to last year, with the industry continuing to face a dire business climate going forward. As a more mid-to-long-term issue, the loss of opportunities for people to visit ballparks and communicate with the players in person may have also led to decreasing fan numbers and other impacts.

Naturally, the six teams of the Pacific League and PLM have held joint events for all six teams in their stadiums. But even outside of the stadiums, the teams and PLM have continued to try to find ways of providing fans with new forms of value. This is especially true of the way they have applied digital technologies, such as their use of both the league’s official video distribution service “Persol Pacific League TV” and the league’s YouTube channel.

Since it was first launched in July of 2013 as a service where anyone can buy and sell easily and safely, the Mercari marketplace app has continued to grow as a marketplace used by many and that boasts approximately 20 million monthly active users as well as a cumulative total of over 2.5 billion listings.* In April 2021, Mercari Group also established Mercoin, Inc. to work on planning and developing services related to cryptoassets and blockchain technologies.

Mercari’s partnership with PLM will roll out a service that allows professional baseball fans to buy and own their favorite moments in the game, which they can watch at any time, and also allow fans to keep these moments as personal collectibles. Going forward, Mercari plans to leverage its marketplace knowledge, cultivated through the Mercari marketplace app, to examine prospects for next year of a marketplace built on blockchain services and collection resale features, for example. In this way, the marketplace would aim to create a dynamic community among users.

We are combining the rich and valuable content in the hands of the six Pacific League teams and PLM with the marketplace knowledge and technological know-how that Mercari holds to build the framework of a new sports business in the shape of a communication platform for the fans.
Note:The values quoted in this press release differ from quarterly averages, such as the numbers of registered users who browsed the Mercari app or website at least once in the month of September 2021 or the MAU disclosed in year-end financial reports, because such figures are quarterly average figures. The cumulative number of listed items represents the sum total of all items listed in Japan since the launch of the service (July 2, 2013).

※This may be subject to future change.